January 2020. New footpad-bumpers are installed. Until now, there has not been enough snow for local light backcountry. Now there is sort of enough.

Summer-Fall 2019. To help with parts and prototyping, a Prusa 3D printer kit is purchased. Some time is spent assembling the printer and learning CAD. Began printing parts for a newly designed BC footpad and rear bumper assembly.

March 2019. Extremely warm weather and the snow disappears quickly around town. Mid month a group ascends Coal Lake Road, a very rough trail, demonstrating the efficacy of the BC version of SkiClaws. See the 2019 NNN-BC page for a little video.

November 2018. Sent aluminum parts made by Quantum to Surrey, BC, for anodizing. Ten sets of NNN BC boots arrived, sized for crowd-funding video volunteers.

Summer 2018. Began planning for a crowd-funding campaign. Ordered ten sets of Sporten Ranger BC skis with a 60mm waist, and ten sets of Rottefella NNN-BC bindings.

March-April 2018. Quantum Machine Works developing the next prototype for light backcountry. It will feature the wider NNN BC binding for greater control. The skis will be shorter, wider and have metal edges. It should make the skate-boarding technique easier on rougher trails.

January 26–27 2018. Attendance at the Snow Show in Denver. After many discussions with industry insiders, decided the next prototype will be for light backcountry on rolling terrain. The skis will be shorter, wider and have metal edges.

October 2017. Quantum Machine Works begins working on the next prototype with a view to mass production. The aim is to have an integrated ski+Skiclaws+binding product on the market in fall 2018.

Saturday 25 and Sunday 26 March. The inventor offered demonstrations and training at the Chadburn ski trails parking lot. Including the week before and after, Doug had more than 50 people trying SkiClaws. The device does have a learning curve but several individuals did master running uphill in one short session.

24 March 2017. Filmed by CBC Northbeat television show. A short segment was posted to Facebook (see above).

24 March 2017. Whitehorse, Yukon CBC radio interview with Sandy Coleman at 7:10 am. The images below were shot in the studio after the interview and posted to the CBC Yukon Facebook page. 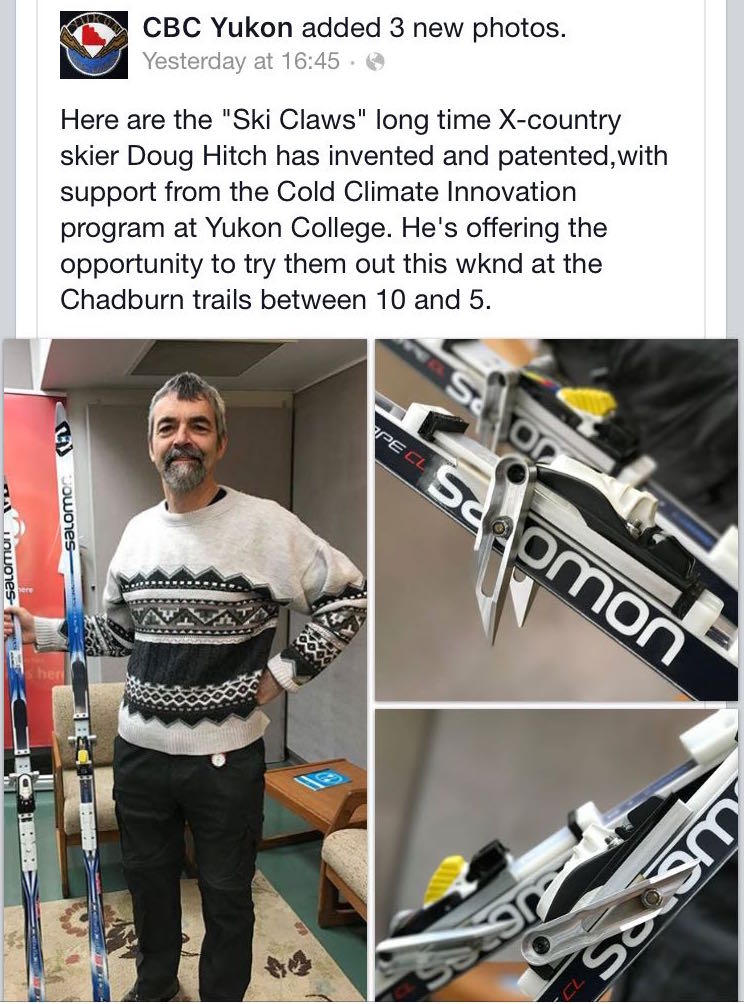 24 March 2017. Exiting the CBC studio I encountered Vince Federoff, Whitehorse Star photographer. A keen skier, he had heard the live interview and rushed to the studio to check out the device. He said he would come out to test and asked if he could take a picture. That evening, standing in line at the gas bar, I jumped when I saw my face on the front page. 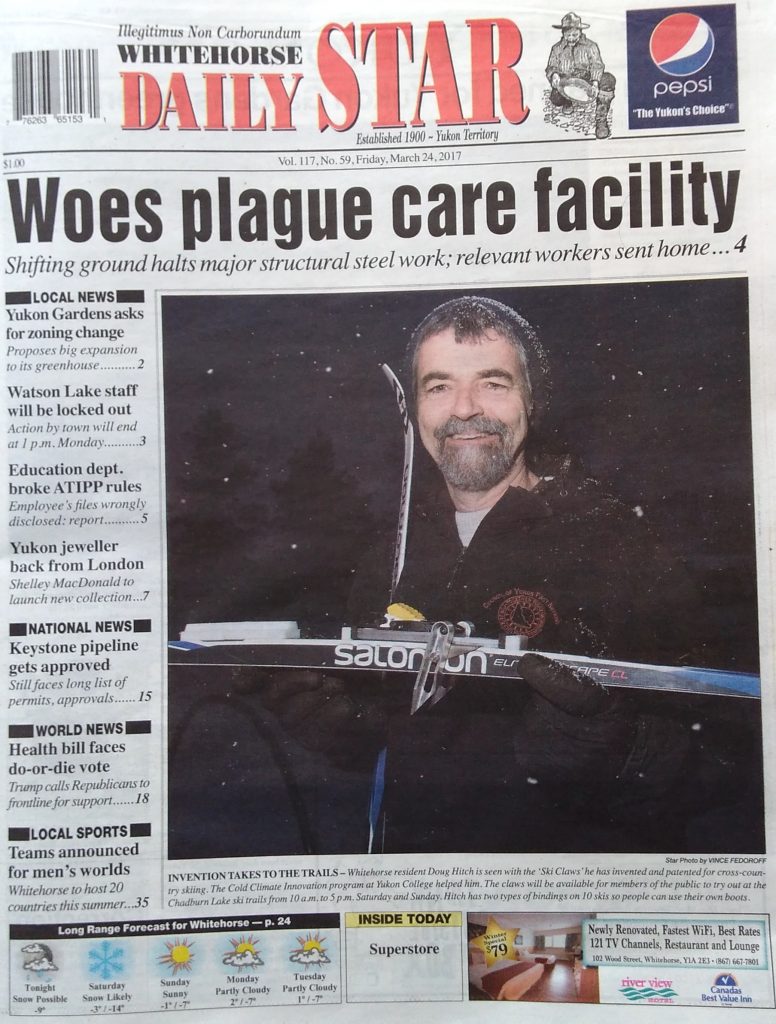 17 March 2017. Quantum Machine Works, Whitehorse, Yukon, completed ten sets of skis featuring SkiClaws prototype 5. There are five lengths with NNN (Rottefella, Fischer) and five with SNS (Salomon) bindings. They are intended for public testing. Below are the main builders, Lee and Karl. 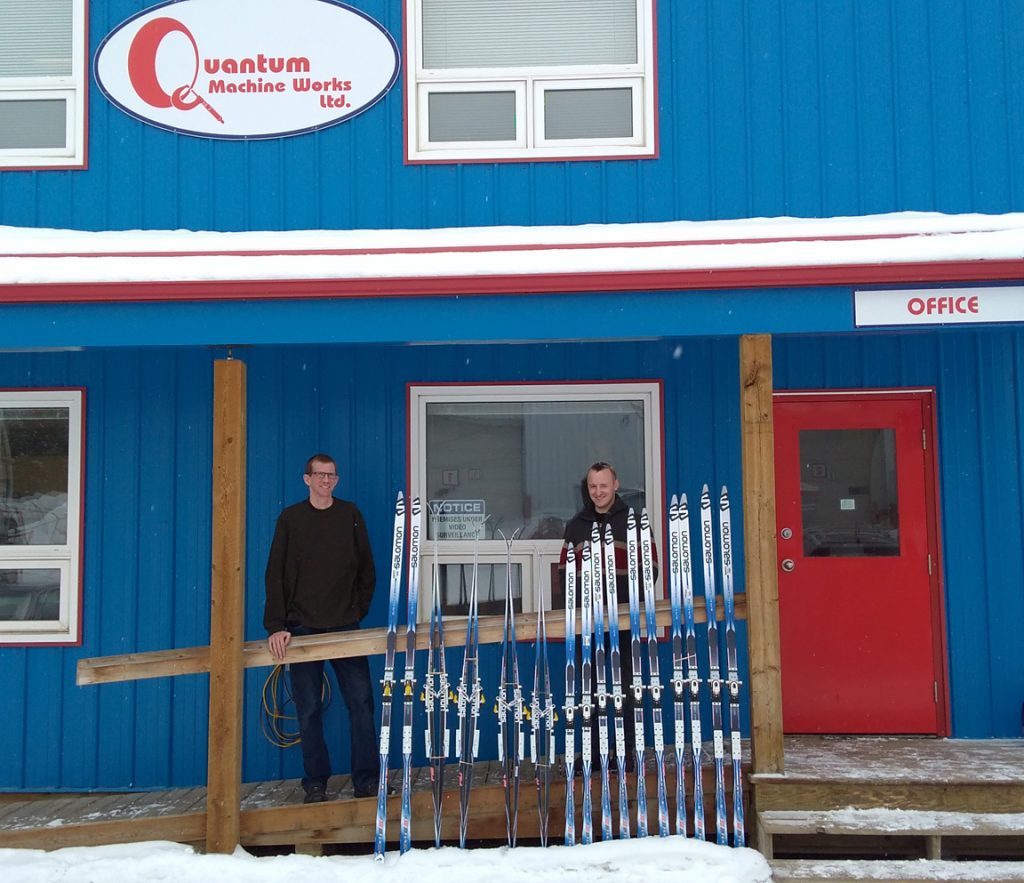 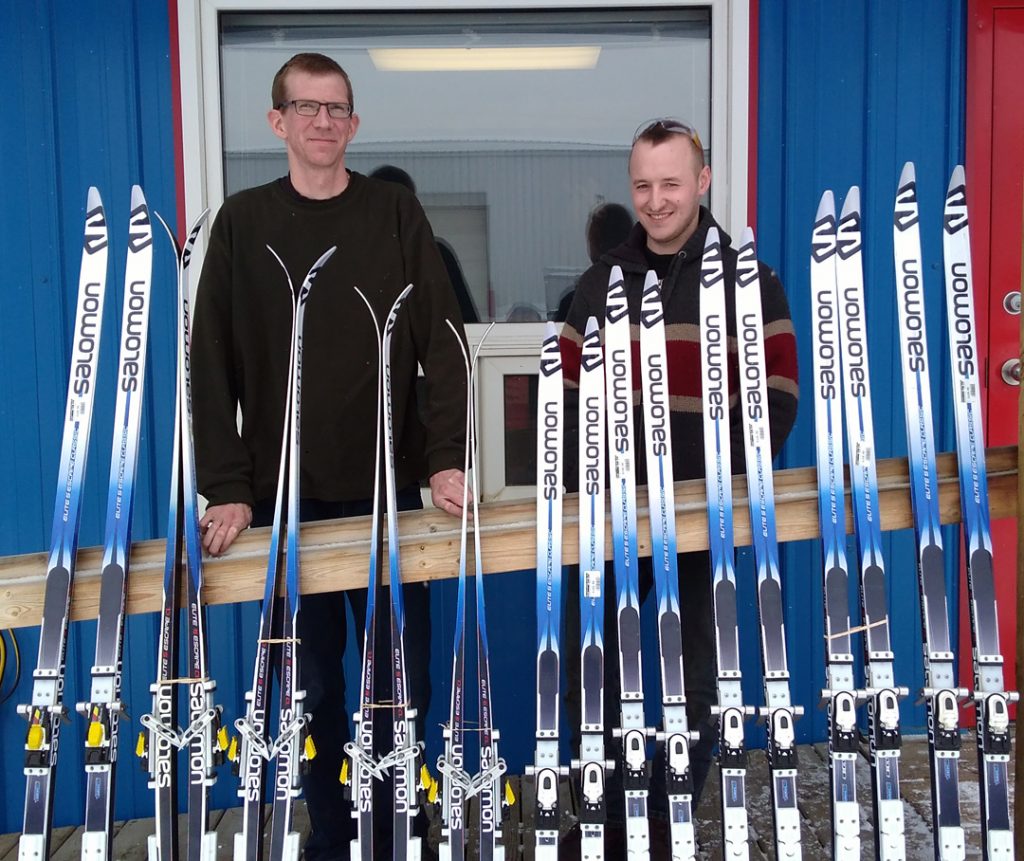